The Far Reach of the White House's Zero Trust Memo 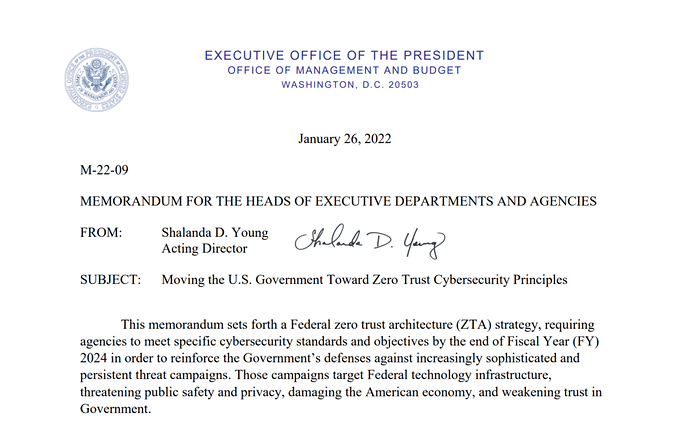 The White House published a memo mandating federal agencies adopt the government's definition of zero trust. What does this mean for cybersecurity and tech companies as a whole?

In our blog post breaking down key points of the White House’s ZT memo, we’re glad to see that it gives a neutral and concrete set of standards for evaluating zero trust. More importantly, we expect the government’s relatively aggressive adoption of zero trust to have an impact on the US tech sector as a whole. Looking back at this memo in the future, we might even call it as the impetus for an inflection point.

But until the agencies reveal their plans on how they intend to adhere to the government’s 2024 deadline for shifting to ZT, we can only speculate as to how this will impact the private sector. The good news is, the memo itself contains the government’s own standards which the agencies will be measured against, and we can extrapolate realistic scenarios from there.

This thread is for discussion on the government’s publishing of their ZT standards and how it can be expected to impact the private sector in the future.